Which pharmaceutical companies have the most SPCs in United Kingdom? 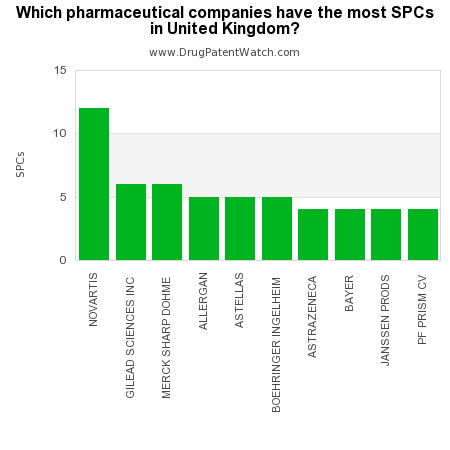 This chart shows the pharmaceutical companies with the most supplementary protection certificates (SPCs) in United+Kingdom.

SPCs are used in European Union and select others to encourage pharmaceutical innovation by compensating for the long time needed to obtain regulatory approval for drugs. SPCs come into force only after the corresponding general patent expires, and normally have a maximum lifetime of 5 years.

The total combined duration of market exclusivity of a general patent and SPC cannot normally exceed 15 years, but a six-month extention may be obtained by responding to a request for pediatric trials.

For a different perspective, see the drug companies with SPCs in the most countries

The pharma companies with the most SPCs in United+Kingdom are:

Back to Pharmaceutical Industry Infographics