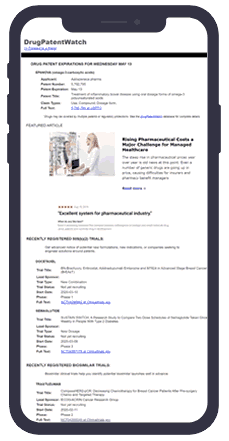 Saxenda is a drug marketed by Novo and is included in one NDA. There are twenty-two patents protecting this drug.

This drug has two hundred and eighty-seven patent family members in thirty countries.

Saxenda was eligible for patent challenges on January 25, 2014.

By analyzing the patents and regulatory protections it appears that the earliest date for generic entry will be February 13, 2026. This may change due to patent challenges or generic licensing.

Annual sales in 2018 were $341mm indicating the motivation for generic entry.

There have been four patent litigation cases involving the patents protecting this drug, indicating strong interest in generic launch. Recent data indicate that 63% of patent challenges are decided in favor of the generic patent challenger and that 54% of successful patent challengers promptly launch generic drugs.